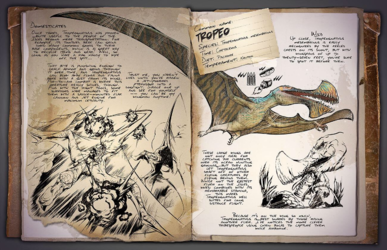 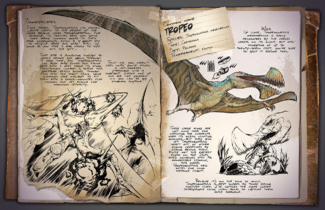 Tropeognathus does not show any signs of aggression towards anyone and anything that comes near it, especially when it lands. However, once it gets hit by anything, including

Chain Bola, it will become aggressive towards the said individual. Nearby Tropeognathus will target after anything that attacked it as well (but this is really rare because at one moment there are only few Tropeognathuses on whole map).

The Tropeognathus size-wise is bigger than a Pteranodon but smaller than a Tapejara, although its wingspan is on par with that of the Quetzal.

Its wings are covered in a striped pattern that ends at the body.

What defines this Pterosaur is its circle-shaped construct on the end of its elongated jaw, said jaw also has sharp jagged teeth. 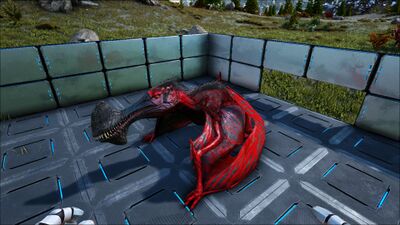 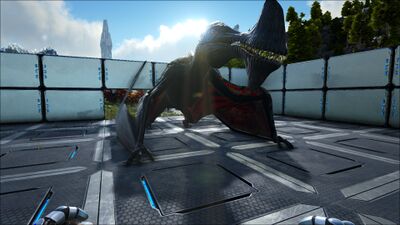 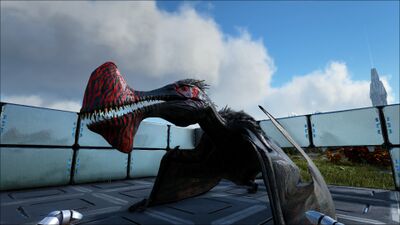 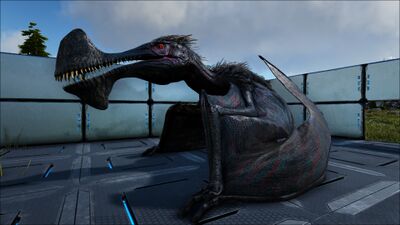 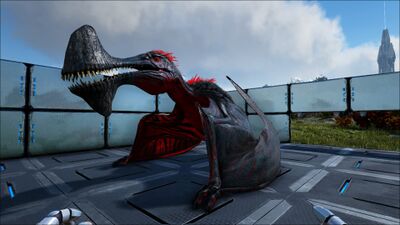 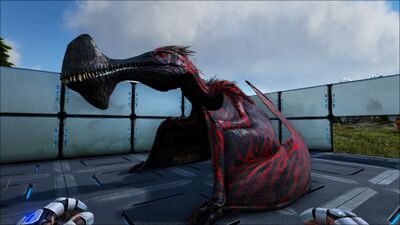 Base Stats and Growth[Bearbeiten | Quelltext bearbeiten]

Type in values of a wild creature to see on which stats it's emphasized. Green values on a high-level creature are very good for breeding. If you have already tamed your creature you can try to recover the breeding-stats with an external tool.[1]

The stat-calculator does not work in the mobile-view, see here for alternatives: Apps

Note that after the creature is tamed it gets bonuses on some stats depending on the taming effectiveness. This makes it hard to retrieve the levels on a tamed creature, so this tool is only for wild ones, but gives a first impression, how well the stats are distributed.

This section describes how to fight against the Tropeognathus.

Tropeognathus generally remains passive even if the survivor gets near them. They only becomes aggressive however, if they were provoked via hitting it through any means.

The advised strategy for fighting the tropeognathus in the wild is to utilise one of the wyvern variants and their ability to use ranged 'special attacks'. This is due to their high damage and speed, allowing it to kill the tropeognathus quickly and efficiently.

Additionally one may follow the same methods for taming: Immobilize the Tropeognathus using Chain Bolas from a Ballista Turret via a Platform Saddle, preferably on a Quetzal though a Bronto or Paracer may suffice if the Tropeognathus is found flying low enough or on the ground. Once immobilized, dismount and shoot from the platform saddle. This is not recommended for high level Tropeognathus’, the bola will likely not last long enough to kill them.

Almost all modernised long-range weaponry will do the trick while fighting against this creature, solong as you stay far away from its armor-crushing jaws.

Its jaw is large enough to break through armor easily. Additionally, they can pull you off a mount and fly high enough to cause a freed survivor to take high amounts of fall damage.

They are very slow compared to other flyers

Tropeognathus is tamed non-violently, rather than through the use of tranquilizers. However, in order to trigger a way of feeding the creature, it has to be held in position with a

Chain Bola. Since it does not attack until it has been provoked the first time, chaining it down in bola will turn it aggressive against the individual.

Ballista Turret in another end with the Chain Bola, and pull it over towards the trap area.

Tropeognathus has several utilities as a flying creature. It acts as a portable

Industrial Grinder; when grindable product are placed inside, there is an option to grind them down below "Show Ancestry" when selected. Moreover, its saddle,

Tropeognathus Saddle has two function if ridden with one: